Every day we repeat the same actions almost automatically: for example when we brush our teeth each morning.
What we don't realize is all the time we lose doing it.
If we brush our teeth for 5 minutes per day, at the end of the year we will have occupied more than 30 hours of our time.
Fortunately, in the computer world many actions are programmable and consequently automatable.
For example: in the boredom of a summer day of last year, I decided to create a Twitter account with the sole purpose of reminding my girlfriend how beautiful she was.
After some thought, I decided to create a small C # program that communicated with Twitter's API to create a new post.
To start the application every 24 hours I chose to use the Windows Task Scheduler, hosted on a free EC2 instance provided by AWS.
This was the result .
That's enough with the premises, let's get to work. 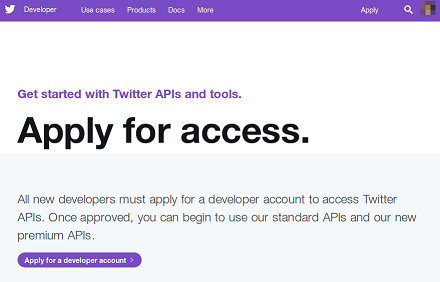 First we need to request and obtain a Twitter Developer account to enter in possession of the necessary tokens to be able to communicate with the Twitter API.
To go directly to the request page follow this link .
In my case the access was obtained in less than 15 minutes, but Twitter specifies that the process could take up to several hours.
After obtaining the access ; login, we fill in the app creation form inside the dashboard and generate the tokens and keys.

Let's create a console project (.NET Framework or .NET Core) from Visual Studio and give it the name we prefer .
Fortunately, some programmers before us have taken the trouble to create interfaces between the Twitter API and our program, to simplify the use of the API itself.
One of these is TweetSharp . Install it by clicking in the Project menu-> Manage Nuget Packages, look for TweetSharp and click on install.
The downloaded nuget package will install all the references needed to use Tweetsharp within our project.
We can now add the directive at the top of our Program.cs class.

Let's go back to our Twitter dashboard and copy the keys and tokens, or generate them if they haven't been created yet.
Let's declare them within our program.


My advice is to put the keys inside of the App.config, so that you can hide them from the code and above all modify them without the need to recompile our application.
Now let's create a TwitterService by passing it all our keys:


4) Create the method of sending tweets

We insert the SendTweet method inside our program, passing a parameter as a string, which represents what we want to tweet.

5) Call the method within our application

Inside our Main we call the SendTweet method and pass it the text string that we want to tweet.

Let's remember that twitter has strict anti-spam rules, therefore we will not be able to send two identical tweets in a row (not even after a full day).
In my case I added a cute number from 1 to 10000 at the end of the string, and Twitter looks like it accept (as of today!) the daily tweet.
To conclude, start the project and the tweet will be posted immediately.
Seeing is believing!
You can find the whole project on Github .
That's all! Thanks for reading.
C# NET Core Automation Twitter